Nothing seems to be more in the news lately than the concept of fake news. The issue of fake news is a great example of how technology in the wrong hands can create a lot of confusion and damage. Internet and social media are great tools that can serve the larger good if used with discernment, but they are so powerful that human nature can also express its darker sides in just as an effective manner. In We Will Reap what We Sow, my second book published in 2012, I explored how leadership and human nature could influence the future of food and agriculture. In one chapter, I was warning that the global digital village would follow the same dynamics as the regular physical little village, but with the potency of the speed of light. The Twitter and fake news mania that we are currently witnessing with the recently elected new world leader unfortunately illustrates my comparison. In the traditional village everyone would know about everything about everyone else and there would be no shortage of rumours and gossips. In the 7-billion people village, the exact same is happening. The difference is the reach and the speed at which it spreads. Human gullibility does not depend on the size of the population. The flip side of this medal is that distrust is spreading at the same pace. Paranoia becomes the counterpart of gullibility. Everything that does not please must be fake, right?

Over the years, the public trust in governments, corporations and more recently science and journalism has been only fading. Opposite to that, people have a blind trust in what they find on Internet, Facebook and other social media, as shows how swiftly and easily they share nonsense that becomes the new truth. The village dynamics create a new type of clans and tribes that rest on their own sets of beliefs and, more worryingly, their rejection of the other tribes’ beliefs. It feels like we are regressing into digital feudalism where the truth does not matter, even if it could mean self-destruction. If you have any doubt about the reborn tribalism, there is a social media engagement platform called trib.al. If you still have doubts , check the following picture I found on Twitter.

Why approach the future of food and agriculture in such terms? The future is not about tribes. It is about collaboration and cooperation between ALL stakeholders regardless of their particular views on the subject. That is the beauty of democracy. Collaboration has always brought prosperity. Tribalism has only resulted in chaos, as we can see every day, unfortunately.

In the food and agriculture sector, controversies have been around for quite some time and there are new ones coming all the time. In the sector, we have been dealing with many opinions, ranging from criticism to plain fake news. And let’s face it there has been some of that on both sides. The food fights have been lingering too much on problems and positions and not enough on solutions and cooperation. How to revert from tribalism to universalism in a world stuck between tribalism and paranoia? It is not easy but it is not impossible, either. 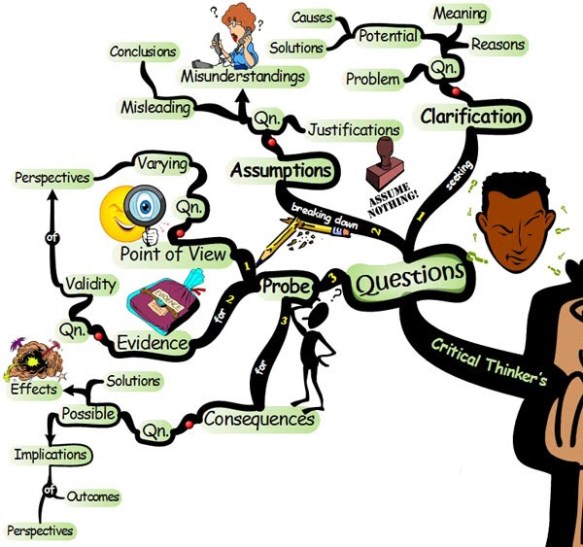 Interesting chart I found on kariecolgy.blogspot.com

In my opinion, the solution is critical thinking. It feels too often that at some point in time, common sense has disappeared and that choosing a set of beliefs is more important than finding the truth. One of the reasons may be that tribalism is more comfortable and less threatening than being proven wrong. Whichever the reasons may be, it is time to reinstate common sense and its twin: critical thinking. Humanity will only progress and solve the many future challenges only by accepting reality and rejecting delusion. It might not be as comfortable in the short-term but it is the only way. If we do not want to see the problems as they are and choose for safe before sorry, it is highly likely that we will end exactly that: sorry. To reinstate critical thinking, it is essential to also make the distinction between critical thinking and criticism. Too often, these two are confused for one another. It is a mistake. Critical thinking is about taking nothing at face value and double checking the facts. It is the search for errors in the thought process to develop a better one. Criticism is only the first step of this process and it generally is received as negative, and sticks there. Critical thinking starts with positive attitude.

There is great value in challenging and being challenged. It stimulates thinking and more and better ideas pop up because of that. This is only a problem if what counts most is whose ideas these are, but ego is rarely of factor of progress. No athlete will ever win the Olympics if he/she is not challenged by competitors, and the competition for being the best is what pushes them to push their limits always further. The role of critical thinking in the process of making progress and improving ourselves and the world around us is just that: forcing us to push our limits and be better. Half truths, or worse fake facts, actually keep us from improving, as they divert our energy in the wrong direction. I am lucky that in my Alma Mater, one of my teachers taught us critical thinking. He was passionate enough to turn me into a fan and, although it sometimes landed me in arguments, it helped me, my staff and my customers achieve more than we would have otherwise. For the future’s sake, let’s practice critical thinking and encourage others to do the same!