Many Hawaiian residents express their concern about their dependence on food that comes from far away. Actually, there are more and more conferences and workshops about the topic of food security for Hawaii. With this in mind, I went to the Big Island of Hawaii for a vacation last April. I certainly would recommend to everyone to do the same if they ever have the chance.

Since Hawaii is part of the USA, food security will be guaranteed from the mainland. However, looking at the situation as if Hawaii was an independent country makes the debate about food dependence from other
regions quite interesting. The Islands of the State of Hawaii are isolated, as they lay in the middle of the Pacific Ocean, thousands of miles away from any significant continental mass.

During my stay, I was reminded about food security and environmental issues in several occasions. On Earth Day, I came across an event that was interesting in many regards. Apart from the more militant speeches about mostly the big bad oil, and the fact that “Lady Green” touched me with a sunflower, I spent some time engaging in conversations with a number of exhibitors, from government organizations to renewable energy systems (solar makes a lot of sense in Hawaii to me). One booth where I spent more time was
the one of the University of Hawaii’s Pacific Aquaculture& Coastal Resources Center. There, I had a good conversation with PACRC’s Director Kevin Hopkins, a very knowledgeable man with extensive experience in aquaculture, not only in the USA, but also in Asian and African countries. Thanks to him, I got a better idea of the challenge to integrate a sustainable aquaculture in the Hawaiian environment. Living in Vancouver, BC, and having worked in the salmon farming industry, this is not a new topic for me. Aquaculture faces similar concerns in both places. 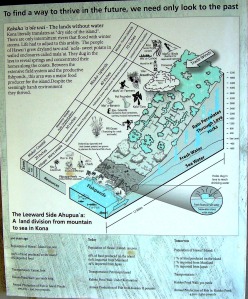 With this in mind, I continued my vacation. At the Kaloko-Honokohau Historic Park, I found a sign showing a comparison of food security between today and 300 years ago. By then, there were 150,000 inhabitants on the Big Island of Hawaii, 100% of the food was produced on the island, 0% was imported, and they were producing 300,000-500,000 lbs. of fish in stone fishponds. Today, for a similar population, only 18% of the food is produced locally, and the Kaloko fishponds do not produce any fish at all (see picture). Of course, these numbers do not take the number of tourists to feed into account. Moreover, the current food consumption per capita is probably substantially richer in calories than 300 years ago, too. However, this history could be a good basis for more constructive discussions about aquaculture. Clearly, aquaculture was a traditional way of improving food security for ancient Hawaiians. The old fishponds were made of walls built with the volcanic rocks, and the fish was passing though a gate made of vertical bars. The small fish could enter, but as they grew bigger, they were unable to pass the gates and leave. This system made me think of a hybrid form of closed containment. In BC, where many discussions are about producing salmon on land, the Hawaiian fishponds are actually a quasi-closed containment on the seabed. It does not require all the land-based infrastructure and equipment, as is the case for land-based closed containment systems. What I saw at this park tells me that the useful could meet the historical, cultural and the modern just to help develop a responsible and productive aquaculture to increase food self-sufficiency for Hawaii. In a region where the ocean space available is as vast as this is the case around Hawaii, I am convinced that there have to be plenty of locations where aquaculture can be conducted without harming the environment, and there have to be more than enough adequate production techniques to do it right.

In the same park, there were remnants of pits in which rocks were set up in many individual planters. In these planters, called mala’ai, the ancient Hawaiians used to grow food plants. This is an ingenious system, because in that area, the fields are covered by lava. There is no soil to be used for open field crops, such as wheat, for instance. On the other hand, there would be plenty of acreage to set up such planters. This would be labor intensive, though.

At the Kaimu-Kalapana black sand beach, I read on a sign that ancient Hawaiians used to harvest seaweed and that apparently, their methods were sustainable. It is only after commercial harvesting by European settlers started that the seaweed quantities plummeted because of excessive harvest volumes. Just like for fish production, researchers from all sides should work on restoring such a seaweed production in a sustainable manner. This example, like all other examples of unsustainable human practices, simply demonstrates that we must produce or harvest what we can, instead of trying to produce or harvest always more while ignoring the signals that we are passing a breaking point.

I spent time only on the Big Island, and I did not visit the other islands. Probably, I do not have the whole picture, especially considering that more than two-thirds of Hawaii’s population lives in the State capital, Honolulu. According to the latest US population census, Hawaii’s total population is of about 1.3 million people, out of which more than 900,000 live in Honolulu. To get a more accurate picture of how much food needs to be produced to meet demand, it is necessary to add the visitors. Per year, the number of visitors is about 7.4 million people, who stay on average 9.15 days. This number expressed in average outside visitors staying in Hawaii per year is 7.4 x 9.15 / 365 = 186,000 people. To simplify, I will estimate the number of mouths to feed at 1.5 million.

For the Hawaiians concerned by the food security or, better said, the low food self-sufficiency of their state (less than 15 %!), what are the possibilities?

Just like in most of the rest of the USA, the local food movement is growing. More and more people are trying to grow some food on their balconies. Of course, this will not be enough to reverse the situation, but it will contribute. Farmers’ markets are gaining in popularity, and I have to say rightly so. Unlike what I am used to in my neighborhood, the food sold on the farmers markets that I came across on the Big Island offer many affordable and actually cheaper foods than in the large supermarket chains. At the farmers markets, I could notice that many more generic vegetables such as onions, tomatoes or bell peppers were shipped from the West Coast of continental US, mainly Washington State. On the other hand, I found quite interesting to notice that the big retailers are also trying to source local products. I only visited a Wal-Mart and a Safeway. From what I have been told, the selling of local products at their outlets is a recent change.

This is interesting, because these retailers will try to be able to source larger volumes, and they actually maybe in a position to stimulate more local food, agriculture and aquaculture production.

The quality of the local food is quite good, although when on vacation everything tends to taste better for some reason. Although I am not much of a beef eater, I was tempted by a “Hawaiian” local grass-fed beef burger recipe, and I have to admit this was the best burger that I ever tasted. It was so good that we went back to the same pub the next evening and I had another burger, while my spouse had a steak. Her steak was simply stunning. And the price was actually cheaper than similar generic beef dishes here in Vancouver.

When it comes to justifying more local food production, I have seen very interesting numbers about the amount of money that Hawaiians spend on food, and therefore to producers outside of their state. According to the same studies, local production would also result in more local jobs. However, I would not develop a plan based on such numbers, not because I doubt them, but because the business must be financially viable as well. I find all the reports that I have read too general or too academic for my liking. Moreover, I am not convinced that the politicians are committed to take the necessary steps to increase food self-sufficiency in Hawaii. They give it quite some lip service, but I miss signs that this topic might be on top of their priority list.

Personally, my first step to see what needs to be done would be to look at how many farms are required to produce what is needed: how many eggs, how much milk, how many chickens, how many pigs, how much fish, how many fruit and vegetables, how much wheat, rice, potatoes, and so on. Once I would have identified the size of the local market for all the food items, I would calculate how many farms are needed to meet that demand. After all, there cannot be food security if there are not enough farms.

For instance, every 10 kg consumption per capita of chicken meat means a production volume of 1.5 million x 10 kg = 15 million kg of chicken. As a chicken weighs about 2 kg, this would correspond to 7.5 million chickens per year. With an average of six flocks per year in a chicken house, this would mean a production capacity of 1.250 million places. This represents about 60 chicken houses. Depending on the size of the farm, my guess would be that 10 to 20 farms are necessary to cover a consumption of 10 kg per capita per year. If consumption were 40 kg per capita per year, Hawaii would potentially need up to 80 farms. Do they have the farmers and the locations for all of them? That is what I would like to determine.

Similarly, in the case of marine fish farms, every 10 kg consumption per capita per year of fish requires 15 million kg of fish, or close to 30,000 tons of live fish. If we were to imagine the containment system from Hawaii Oceanic Technology that I mentioned in “High-tech fish farm”, it almost could be produced on one farm. Of course, it would not be wise to put all the eggs in the same basket. If production volumes were comparable to a salmon farm, the 30,000 tons could require 10 farming sites. This is just theoretic in order to give an idea of the production space needed. There would be different species produced, but the calculation method remains the same for each of them.

With such an approach, for all the relevant food products, it can appear very quickly if being self-sufficient for the various food items is realistic or desirable.

The final exercise, which is also the most important, is the business plan per farm, to assess the viability of the individual projects. Even local, food production must be competitive. The example of Hawaiian sugar cane shows that this is not necessarily the case.

Next to farmers, food producers and market outlets, the Hawaiian government can stimulate more local production if it wishes to do so by setting the appropriate policies. Developing such a thorough review of how to reduce food dependency on outside sources in a market-driven and viable manner for the long term would be quite enjoyable to carry out in paradise!