This could have been the third example, after canola and vines, of what I called earlier “Science being taken hostage”, but this story actually goes beyond just the tactical use of selected science.

The Fraser River sockeye salmon is returning in record numbers to British Columbia (BC) in Canada, the highest numbers in a century. This good news comes at a time when discussions about the disappearance of sockeye were reaching a climax. Last year, the number of returning sockeye salmon was very low and considered by some as alarming. Scientists, and pseudo-scientists, were presenting their own conclusions and they were debating about how the future looked. 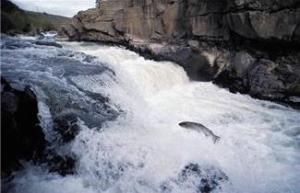 Those who are not familiar with the salmon issue in BC need to know that for 20+ years, a war between environmentalists and salmon farmers have been waging. Although all the participants in this debate claim to base their statements on science, Nature is just throwing facetiously some oil on the fire. Environmentalists have accused salmon farms of being the cause for the (apparent) depletion of wild salmon stocks. Much of the accusations rested on research carried out by a local environmentalist who linked her sea lice counting and mortality of juvenile pink salmon to fish farms. Until last year, she seemed to have something of a case, as returns of pink salmons into BC rivers were low. Last year, though, the pink salmon returned in large numbers, which contradicted her theory. For years, the fish farming industry did what it had to do. It always denied any responsibility in the decreasing numbers of pink salmon, using the selected relevant science to support its case.

Ironically, when the pink salmon returned massively last year, salmon farmers were cheering the good news, but environmentalists had been rather discrete to express what should have delighted them. Maybe good news is not always good news. To make things more twisted and controversial, last year’s returns of sockeye salmon, which is a different species of Pacific salmon, were quite low. Although environmentalists never addressed any concern about salmon farms and sockeye numbers, they suddenly saw a connection. The debate became so animated that the Canadian Prime Minister himself decided to set up an inquiry about the disappearing Fraser River sockeye salmon. An inquiry commission was set up with the objective of reviewing with all parties involved the situation, and then present some conclusion. Of course, science(once again) must be the basis for the investigation. I can give you the summary of what the conclusion of the commission would have been, and still might be. “The ecology of salmon is complex and it was not possible to identify any culprit for the disappearance of sockeye salmon with certainty. The commission recommends a number of actions to be taken by all stakeholders in their respective fields of activity. The commission recommends the set up of a monitor group to report and address any new development that can lead to a better understanding and management of the sockeye population”. Something of that nature. The thing is that the life cycle of salmon is quite complex and involves a vast array of environmental conditions in the mountains, in the lakes and rivers and in the ocean. It takes 4 to up to 6 years for a sockeye to return to its birthplace and many events can take place on their route. The high return depends on how many eggs were laid, how many hatched, how many juvenile salmon survived in fresh water and later in salt water. The survival rate can depend on how much food they had available on their trip, or on the population of their natural predators. And all this may be the result of human activity, but also of natural causes. Fact is very few people really know, and can really know what happened. Yet, most of the participants claim to have the knowledge that explains a drop in the sockeye population. There just seems to be less knowledge available about why the population increased.

The whole controversy is not so much about science as it is about politics. In the highly polarized political world of BC, looking for consensus is obviously not enough fun. Fighting is where the joy is, even if it means that everyone may lose in the end. Let’s face it; it does not take a genius to figure out how to have a harmonious cohabitation of fisheries and aquaculture. Unfortunately, there is little action in that direction. Once the problem is solved, there would be nothing left to criticize. Being a critic is a remunerated job.

With the high numbers of fish coming back, a new claim appears: salmon farms are not causing any problem at all, without presenting any science-based proof of that. Of course, this conclusion is already challenged. Remember what I said about polarization. The controversy will go on, as time goes by and future returns will probably show lower levels again. Salmon farmers are not off the hook.

And this brings me to what goes beyond the discussion about science in the salmon debate. It illustrates several topics that I address in my book Future Harvests: sustainability and market orientation. With the high numbers of sockeye, the word out there is to catch as much as they can. I was talking with a fish broker last week. He told me that there is so much fishing activity in the plans that there is a shortage of ice and of totes to hold the fish in processing plants. A few weeks ago, the BC environmentalists denounced the certification of Fraser River sockeye as sustainable by the Marine Stewardship Council, claiming that the low return numbers of last year told a different story. Now, the numbers are so high that fishermen seem very eager to fish as much as possible and sustainability concerns have disappeared. It could be a good idea to take only what is possible to process and sell, and let the surplus of fish to swim back into the rivers and lay as many eggs as possible. This would help keeping high numbers for the return in 4-6 years from now. It would be rather sad to deplete the future stocks. Although fishermen have always criticized salmon farming companies for being driven by profit only, their attitude with the current situation follows pretty much that logic, though. With prices going down, I expect to hear soon some fishermen complain that there is too much sockeye. Question is who will get the blame this time?

This rush to catch that many fish illustrates the lack of market-oriented thinking. In fact, it could hardly be any more production driven. Fish brokers wonder where to sell all that fish. Simple economics tell that the price for salmon will fall. This has already started, and is likely to continue. Maybe saving more salmon to go reproduce in the rivers would have contributed to get better prices, too. In economics, this behaviour is known as the “preference of the present”. For instance, when you have a limited amount of water to cross the desert, you will choose to drink it up to satisfy your thirst, instead of rationing it and keep some for tomorrow.

Tonight, I will go for sushi!