The past year ended with its yearly ritual, the conference on climate change. The charade has become so predictable it is hardly interesting anymore. Nonetheless, they followed their traditional operation procedure:

I have to say it is all looking like the movie Groundhog Day. Personally, I am getting a bit weary of all the repetitions and in my field just as well. I hardly read anything new or interesting about the future of food and agriculture. Yet, there are no shortage of articles and reports but what they contain I had already written in my two books that are seven and nine years old. I even see more and more illustrations pictures of such articles that look eerily reminiscent of the cover of my second book We Will Reap What We Sow (which by the way is priced incredibly low –less than US$4.00- at amazon.com lately but apparently not on the other amazon country websites –don’t know why but it is a bargain for as long as it lasts). Here are a couple of examples of these illustrations 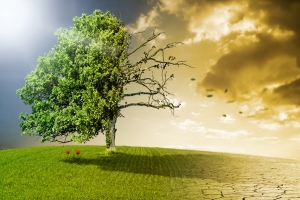 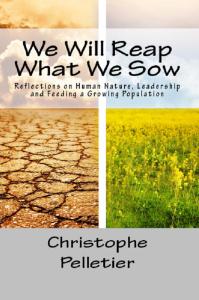 If this shows that I often am ahead of the pack, which is a good thing for a futurist, I wish I were not this much ahead. In one of my previous articles, I was announcing that financial market troubles were coming back. Well guess what.

For me, the current “problem” is that I am not learning anything new and I do not see any real attempt to prepare for a prosperous future. Yet, by the sound of it, we will have plenty of food. Aquaculture will feed the world, so will insects and so will GMOs and so will organic agriculture and so will lab meat and so will synthetic foods and so will algae and so will small farms and so will industrial agriculture and so will tech and so will vegetarianism and so will vegan, etc etc… Sounds like we can sustain hundreds of billions of people, except for a couple of simple important details: all these options will compete with each other for resources, all of them will have to be profitable and sustainable… and they won’t be. Also, for as much as there are lots of start-ups and innovation (pronounce disruption if you want to sound trendy and modern), they do not really address any fundamental problems but are aimed at developing niche businesses instead with the hope to be bought by some large corporation for a high share price. Besides, the new innovation model is “innovate now, think of the consequences later”, which is the opposite of what responsible innovation should be in my opinion, but hey you have to do what you have to do to become rich quick. In the same spirit, I am rather disappointed by the so-called billionaire philanthropists who suddenly seemed to show some change of heart from their previous years of hard-nosed capitalism and greed. Since their net worth never seems to drop, I suspect that their charitable foundations and activities are just an excuse to develop financial constructions to move their money around without being hit by taxes. Actually, I do not see them donate their money but they do invest actively in start-ups or buy shares from existing corporations and cash in nicely when those are bought. The takeovers of Syngenta and Monsanto must have been great boons that made it worth their while to even promote those companies as being the future. No, they are not philanthropists; they are investors. Philanthropists give money away; investors are after capital gains. It is not quite the same. How many of these philanthropists have donated money to rebuild Puerto Rico? Have they even been there when Maria hit? And there are more examples of disasters where money that these guys do not need would have helped greatly to rebuild livelihoods but they did not show up. Let me try for a second to think of myself as a wealthy billionaire. Let’s say I would have 50 billion dollars of net worth. If I gave half of it for humanitarian goals (philanthropy from philo=loving and anthropos=human being), I still would have 25 billion dollars in the bank, which might sustain me for the rest of my life if I decided to live frugally, I suppose (yes it is sarcasm). The other 25 billion could do a lot of good. Of course, I would drop significantly on the list of the world’s most wealthy but I hope my ego could cope with that. Have you seen any of these investors rebranded as “philanthropists” actually do any such thing? Anyway, let me move on with the rest of this article.

Since I do not like to do the same over and over again, I am looking at 2019 as my last year with a focus on the future of food and agriculture. I will have done it for ten years, which is good enough and not only my writings are still as relevant as when I published them, I still see them as the most comprehensive look at the topic. I will not walk away from food and agriculture but I think I will focus on other things and my article for this year will show a shift of scope. I need change and I need variety, and it is missing at the moment. What I intend to do this year is a series of what I would call “what’s ahead” articles by presenting concise points about a number of topics that will be of increasing importance in the future. It still will be related with food and agriculture but will also take a look at the bigger picture. As such, it will be a bit of a repeat from my books but with focus on action points and breaking points. Among the topics I have in mind, here is already a tentative list:

For the sake of variety, I will alternate with articles about lighter topics about proper nutrition and consumption behaviour. Expect to read quite about the following words: